Demonstrate how to load, display, and switch between different languages.

The example demonstrates how you can load, display, and switch between different text strings at runtime.  This feature allows you to display your UI/UX in different languages, catering to the end users’ preferred language.

The IGroupSystem allows you to logically group agents together. Agents can exists in one or more groups.  Groups can have one or more sub groups.  You can also build relationships between groups.

This scene uses the “Localizer” object which allows you to load different language text files.  Examine the files “en-us.txt” and “es-sp.txt” to see how you can add more strings to those files, or use them as examples for creating new localization .txt files in the language of your choosing. When you are ready to load them at runtime, drop them to the  end of the languages array on the Localizer object. 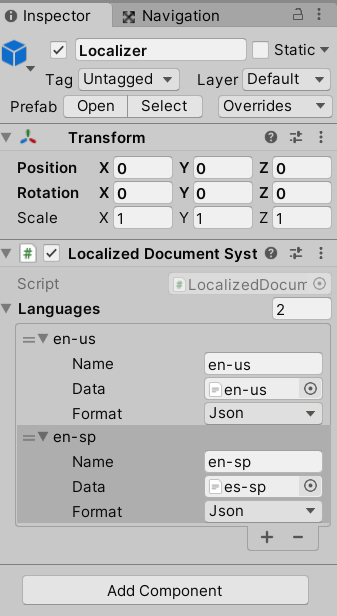 In the scene, under Canvas is a game object called “Dropdown”.  Select it and, in the options section, type the name of your language that will display.

Add this script to an object in your scene to enable the switch of languages at runtime.